Mike
I am an internist doing primary care and hospital medicine in New York City. I hate quackery and those who profit from it. I also detest lawyers (except my brother of course). 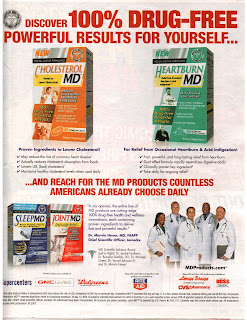 In my last post, I opined about a print ad I saw for a line of products I call “BLANK MD”, and how I objected to the use of “MD” in the product names. But upon further reflection I realized the MAIN REASON why I find the “BLANK MD” ad campaign so objectionable.. It is not just the use of MD in the name that is obnoxious. It is the name of the products themselves that is obnoxious!

What do I mean? Well, most health food supplements are named what they are. For instance, if one went to GNC and bought a box of Gingko biloba on the recommendation of a friend or a radio show host, presumably to help memory or ward off a cold, or whatever the particular interest in the supplement, then you would simply look for a product called “Gingko biloba”. That is all well and good. And the product may make such claims.

Incidentally, supplement companies do not get a pass under DSHEA regarding labeling of their products. To quote Dr. Stephen Holt, MD, who wrote an article in 1996 on this topic in a journal I don’t read called “Alternative and Complementary Therapies”:

It is of utmost importance to note that labeling statements made under the DSHEA cannot make a claim to diagnose, mitigate, treat, cure, or prevent diseases. Only those specific claims linking a supplement to a disease state that have been preapproved by the FDA under the NLEA, such as soluble fiber and heart disease, may be made.

So the manufacturer of Gingko biloba cannot write on the label “Can cure Alzheimer’s disease”. Instead they write something like “May support mental sharpness”. In this way, we can separate medicine from supplement.

But, o-HO, Iovate, being the clever company it is, figured out a way around this problem. By calling the product a DISEASE, rather than the supplement it contains, and slapping a respectable “MD” after it, they create the appearance of a legitimate medicine, while making absolutely NO wild claims! Instead of selling a product called “Oramge peel extract” and making the claim “Believed to relieve symptoms of acid reflux”, one can just call it “Heartburn MD” and then technically need not say anything! The phrase “Joint MD” is even more vague and open to flights of imagination. They could sell Gingko biloba mixed with some other garbage and call it “Memory MD” or “Alzheimers MD”.

I find this abhorrent. They should not be allowed to sell this garbage under these names. It should be called what it is.

My next few posts will examine the supplements in question and the doctors behind them.
Posted by Mike at 11:43 AM

Ha! How bout "Orgasm MD". I'd probably buy that one.

It annoys me when people say that nutritional supplements don't work, because despite some quacks there are supplements that seem to have good evidence behind them. For example, osteoporosis is treated with bisphosphonate drugs, which reduce fractures by roughly half. To their credit physicians prescribe calcium and vitamin D supplements, but supplements of strontium, perhaps magnesium/vitamin K, and the traditional Chinese medicine epimedium (commonly marketed as "Horny Goat Weed" in flashy packaging targeting male potency) are all nearly as effective. The fundamental idea that old women are designed to get broken bones by some error of biology is laughable - there is obviously something wrong with the environment, whether it is nutrition, exercise, or some other factor. So we should expect nutritional supplements to be the main line of defense. Instead they are not allowed to claim benefits with reasonable literature support, and are under constant threat of being banned if they ever provide too much competition to a patented medicine.

Thanks for this post, pretty effective piece of writing.

Gosh, there's a great deal of useful material above!

each time i used to read smaller posts which as well clear their motive,
and that is also happening with this post which I am reading here.